Back to All News Articles

With economic uncertainty making it harder for leaders to predict long-term actions and budgets, more organisations are turning to alternative types of employment such as contract and fixed term to bridge talent gaps. At the same time, people are now looking at options they might never have considered six months ago, with many employees who have been made redundant pivoting to contract work to meet their incomes needs and career contractors accepting permanent roles. But with the lines between permanent, fixed-term and contract work blurring significantly, it’s clear that the next iteration of the employment market is going to look very different to the one that came before it.

In our recent webinar, held on the 23rd of September, Hnry CEO James Fuller explored the evolution of various ways of working in New Zealand and discussed how individuals and organisations can benefit from modifying their approaches to work.

To help you understand current employment trends and develop long-term strategies for growing your career or scaling your workforce, here is a summary of the key insights from the webinar.

The Changing Nature of Permanent Work

Permanent work is often viewed as the “safe” option but as we have seen in recent months, this is not always the case, with the many restructures and redundancies that have occurred calling into question the apparent security it offers. Permanent work could instead be termed “salaried work,” which more accurately reflects the way it functions in the current market.

At the same time, attitudes towards salaried employment are changing. Where 15-20 years ago company loyalty was highly desirable, the concept of staying in one role for many years has gone out of fashion, with tenures of 18-24 months being extremely common (and widely accepted by employers). Indeed, today’s tertiary graduates are entering the workforce with a very different idea of what career progression looks like, and generally expect to move across a diverse range of roles and employers over the course of their working lives. 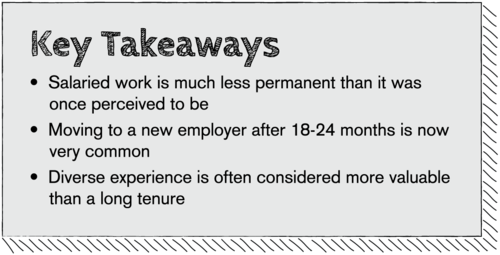 Contracting has changed significantly over the past decade. Although it was once considered less stable than salaried employment, this has not been the case for a while, with many options now available to allow people to maintain a consistent income. Contracting has become a core resource in both the private and public sector and has been prevalent in government agencies for some time. In the wake of COVID-19, it is now more pervasive than ever, not just in flexible industries such as Film & Television but also in more traditional corporate organisations.

For people with the right expertise, there is enough work to allow them to contract permanently should they choose to, and taking on contract opportunities alongside a salaried role is increasingly commonplace. 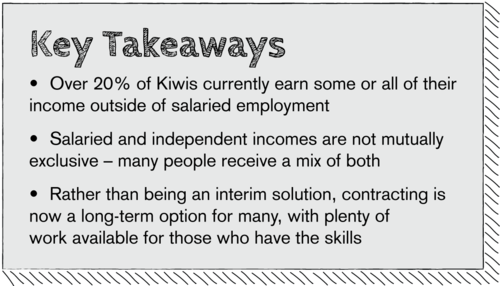 The Fall of Fixed Term

Fixed term contracts (FTCs) are usually offered where there is a temporary need, such as to cover parental leave or supply a specific skill set for a project. Unlike contracting, people rarely undertake fixed terms roles on their own – they are typically stop gaps until the individual picks up another salaried or contract opportunity.

In recent years, FTCs have begun to fall out of favour, with employees recognising the drawbacks of this type of arrangement. While they aren’t burdened with the financial admin that comes with contracting, they also don’t receive the same benefits in terms of training or security. In this way, fixed term contracting is sometimes perceived as the “worst of both worlds,” prompting workers and organisations to focus on other ways of working to meet their needs. (You can learn more about fixed term contracts in our recent blog)

As a result of the current economic climate, many people are looking to “de-risk” their incomes, seeking ways to diversify to multiple sources (e.g. freelancing alongside a salaried role) rather than relying on a single employer to supply their earnings. In doing so, they are creating a “portfolio career” that gives them greater autonomy and the ability to prioritise skills depending on the demand in the market.

Meanwhile, organisations are becoming more comfortable with flexible resourcing which, in conjunction with a core of salaried staff, allows them to scale up or down as they need to. Many are developing a trusted pool of people they can call on to provide scale when required. COVID-19 has also accelerated the move towards remote working, something which (while not new) has advantages for individuals and organisations alike and has drastically changed the nature of the workforce. 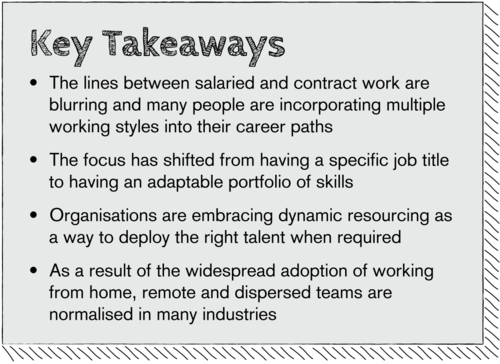 The evolution of work has given people the ability to move beyond the limitations of traditional roles and choose what is right for them, while at the same time transforming mindsets in sectors across New Zealand. The way we earn an income and manage our workforces have changed drastically, and it’s safe to say that the “future of work” is, in fact, here.

This is just a glimpse of what James Fuller covered in the webinar – we encourage you to click below and view the recording to get a full picture of the trends and insights he examined.

If you would like to discuss any of these points or find out how we can support you and your business during this time, please don’t hesitate to reach out.