Back to All News Articles

5G is the next generation of mobile connectivity, which succeeds the current 4G and older 3G systems. When the smartphone came out, equipped with 4G technology, it brought the 3G network to its knees. 3G simply couldn’t handle the masses uploading millions of photos and videos every minute, the current state of online mobile gaming, the volume and speed of online payments we now take for granted or services like Uber that can summon a driver on a moment’s notice and show customers where their driver is in real-time.

Now, as 5G prepares to take its place as the leading cellular network, we are only limited by our imaginations as to how it will change our world. The amount of data that is being generated keeps growing, and faster speeds and lower latency for businesses mean faster responses and better services for consumers, even if they aren't using 5G themselves.

Without a doubt, 5G will transform how we live, work and play – not to mention the types of skills that employers will need within their teams in the future. Here’s what you need to know.

The Race to 5G

5G has been the subject of intense focus by countries whose governments see the race to 5G as a proxy for their political and economic strength. This is mainly due to the technological advances predicted to be catapulted by 5G. Some countries, such as the US and the UK, are ahead of the curve with 5G, while other world powers such as China, Japan and Russia are aiming for a 2020 rollout. Vodafone NZ aims to switch on their 5G network in December 2019, with other NZ providers planning to switch on their 5G networks sometime next year.

The global attention 5G is getting is largely due to its promise to deliver faster speeds and more reliable and consistent connections, but adoption won't be immediate, and along with this increased opportunity comes increased risk as well. The official worldwide 5G standards were approved in December 2017, however, there is still a lot of work to be done on behalf of cities, device manufacturers and the carriers themselves.

Significant investment is required now to upgrade network, security and data technologies and infrastructure, and businesses looking to utilise the network in the future will need to upskill or hire people with the expertise to help them navigate the transformation. Consequently, 5G will most likely exist alongside 4G for quite a while, just as 3G and 4G have coexisted and continue to do so.

There are over 15 confirmed 5G-enabled smartphones that are already available from the likes of Huawei, Sony, Samsung, Motorola, LG, Xiaomi and more. New 5G phones boast features such as 3D depth-sensing cameras, improved face detection and image stabilisation, and higher megapixels. However, these features come at a price and could widen the gap between the haves and have-nots. It’s still unclear what the cost of the service will be and if the providers of 5G in NZ will want to recoup the costs of their investments in what they charge consumers for the use of the network. 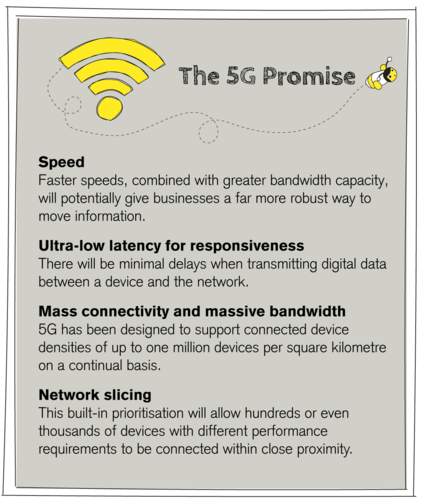 How Will 5G Shape the Future?

Look into your crystal ball and imagine the future. 5G is expected to become the backbone of autonomous cars, AR & VR applications, Smart Cities, Smart Grids and industrial IoT, enabling seamless connectivity at breakneck speed. For businesses, this translates into multiple lucrative use cases worth exploring.

The ability to capture data from remote sensors, transfer it to large data centres and apply AI, machine learning and data science techniques to it for near real-time analysis is where enterprises are likely to see the biggest early gains.

Driverless cars are another much-talked-about and long-awaited dream that 5G could finally make possible by enabling messages to be transmitted and decisions to be made in real-time. A significant drop in the reaction time when one device talks to another will give cars human-like reflexes and open up multiple possibilities for connected infrastructure and a smart city ecosystem. Likewise, IoT and 5G will be critical elements in our ability to deliver sustainable health services, with applications ranging from remote health monitoring to remote robotic surgeries, improving early detection and patient outcomes.

At the same time, increased use of video technologies, AR and VR is expected. Video, which was near-impossible to use effectively on 3G, was made a reality by the advent of 4G. The plethora of HD video-on-demand services now being consumed on mobile devices is eye-watering. Snapchat, Facebook live-streaming and TikTok are all new applications of video on mobile devices. As a result of 5G, video could be applied to corporate training, enable 3D smart glasses that reveal electrical wiring on building sites, provide richer experiences for people living with limited mobility and a range of other things we haven’t even thought of yet that might disrupt whole industries.

In addition, further globalisation could be another result of 5G and possibly provide the opportunity for NZ businesses to manufacture goods in automated factories overseas. In manufacturing and integrated supply chains, the technologies will enable the automation and coordination of manufacturing processes across geographically and organisationally dispersed units.

A Long Road Ahead

We're still in the early phases of 5G's global rollout. With new phones, new chips, new apps and more ways to use data than we’ve ever had before, 5G will shapeshift as it expands and matures, speeding up technological advancements and digital disruption.

At present, however, we can probably expect some growing pains in the form of inconsistent 5G coverage and faster-draining batteries as our 5G mobile devices switch back and forth from 5G to 4G while the coverage improves. The major city centres will likely see coverage expand drastically in a short space of time, while those further out will likely continue to bounce between 3G and 4G, with the occasional burst of 5G. Still, what excites me most is trying to imagine the new disruptive products and services that will be enabled by this technology and, as coverage improves, what could be possible when this new technology is combined with Kiwi ingenuity.

If you’re planning your next career move or recruitment drive in the Tech industry and want to work with a specialist IT recruiter who has a finger on the pulse of the latest tech developments, reach out to me today.